Artificial intelligence is the topic of the hour. This was not any different at Bosch Connected World. Nearly 3,000 IoT enthusiasts talked about business models and innovations relating to the Internet of Things in Berlin on March 15 and 16, 2017. The top three topics were artificial intelligence, automation and openness.

Bosch CEO, Dr. Volkmar Denner’s announcement that Bosch would in future supply the “car brain” caused quite a stir. He was alluding to the cooperative partnership with the graphics chip manufacturer Nvidia. These are precisely the kind of partnerships that are needed to reach the next stage of the Internet of Things, as he explained in his opening speech: “Taking the IoT to the next level.” What’s more, such a partnership above all requires trustful cooperation to ensure that the Industry 4.0 vision also becomes a reality.

Fascinating insights into the cars of tomorrow

Bosch’s IoT strategy is based on three pillars: sensors, software and services. Denner and Dirk Slama, Chief Alliance Officer at Bosch, demonstrated what this actually looks like in practice based on various use cases. The car of the future will, for example, send its mileage to the Bosch IoT cloud. There the data is stored by means of the new and secure block chain technology. Should the car owner wish to sell his vehicle later, this information will be provided to an online sales portal such as Autoscout24. A cooperative partnership with TÜV Rheinland makes this possible. Mileage fraud will thus soon be a thing of the past.

Another example involved a car that reports a defect. In the future, it will independently make an appointment with the workshop. But Bosch also has an exciting solution up its sleeve for the workshop itself. Using augmented reality (AR), mechanics will be able to call up the exact service instructions on their special glasses while making the repair.

The vision of the “connected car” being used as a workspace is also interesting. Voice control can be used to make appointments and shopping lists. You can even check out what’s inside the refrigerator.

Another function is also incredibly practical, namely, searching for a parking space. The car of the future will thus “know” where free parking spaces are to be found and will navigate there.

The presentations on the second day by Dr. Dirk Hoheisel, Bosch Managing Director, and Jen-Hsun Huang, founder and CEO of Nvidia were of course eagerly awaited. The two companies are jointly developing a central vehicle computer. This “AI car computer” – as the name suggests – is equipped with artificial intelligence. It is basically the brain that steers driverless cars through complex traffic situations.

This will allow cars of the future to not only identify the environment by means of sensors but even to interpret it. Above all, however, the car will then be able to make predictions about how other drivers will behave. It will thus, for example, detect signaling cars and slow down appropriately or drive around them. The computer will store the knowledge acquired while driving on artificial neural networks.

IoT and the future of the supply chain

Also on the second day, SupplyOn presented an innovative Industry 4.0 scenario. This time from the aerospace industry rather than the automotive industry. The topic of collaboration also plays a crucial role in the future of “aerospace supply chains”. That is why major aerospace companies already created the central platform AirSupply years ago together with SupplyOn. It covers all major supply chain management processes.

But like any system, it can still be improved and equipped with more intelligence. Companies are particularly interested in the following two questions: Will the components arrive on time from the supplier? And will they arrive in good condition? Many components after all, react sensitively to heat and humidity, which often leads to corrosion during transport. These quality problems often result in delays in delivery and thus production.

The idea was then successfully implemented as an Industry 4.0 project within 90 days. The solution is based on a sensor cloud. A so-called “pairing” first takes place between the material and sensor. This allows the parts to be monitored during the entire transport route, as Christian Kastl, Industry 4.0 Manager at SupplyOn, showed in a live demo. The position and condition of the goods are displayed and analyzed in the Visibility & Analytics system in near real-time. The track-and-trace solution is thus directly integrated into business processes.

The whole world of IoT

Bosch Connected World was packed with exciting and inspiring presentations. One often would have liked to be able to become three persons in order to participate in the parallel break-out sessions. They covered an incredible range: from “Connected Agriculture” to “AI & Deep Learning” through to “Augmented Reality”. The “Connected Logistics & Supply Chain” panel discussion was of course extremely interesting for us. The presentations by Bosch, BASF, FedEx and Aethon provided many exciting ideas about where logistics is headed.

IoT Hackathon: from the idea to the product

The IoT Hackathon was a very special experience for our colleague Johannes Jilg. Together with more than 350 software, hardware and product developers, he had the opportunity to test the open tools from Bosch as well as other partners. The declared aim of this parallel event was to develop “connected” products, apps and services.

The whole thing was divided into four categories. Jilg chose the Hack Challenge in the manufacturing category. He and his team developed a predictive maintenance app. And with great success: Together with his team, he won this challenge and also reached the finals in the technical brilliance category. On top of that, the four also received an award from GE Digital for the best idea and implementation on the GE Predix platform.Our congratulations! 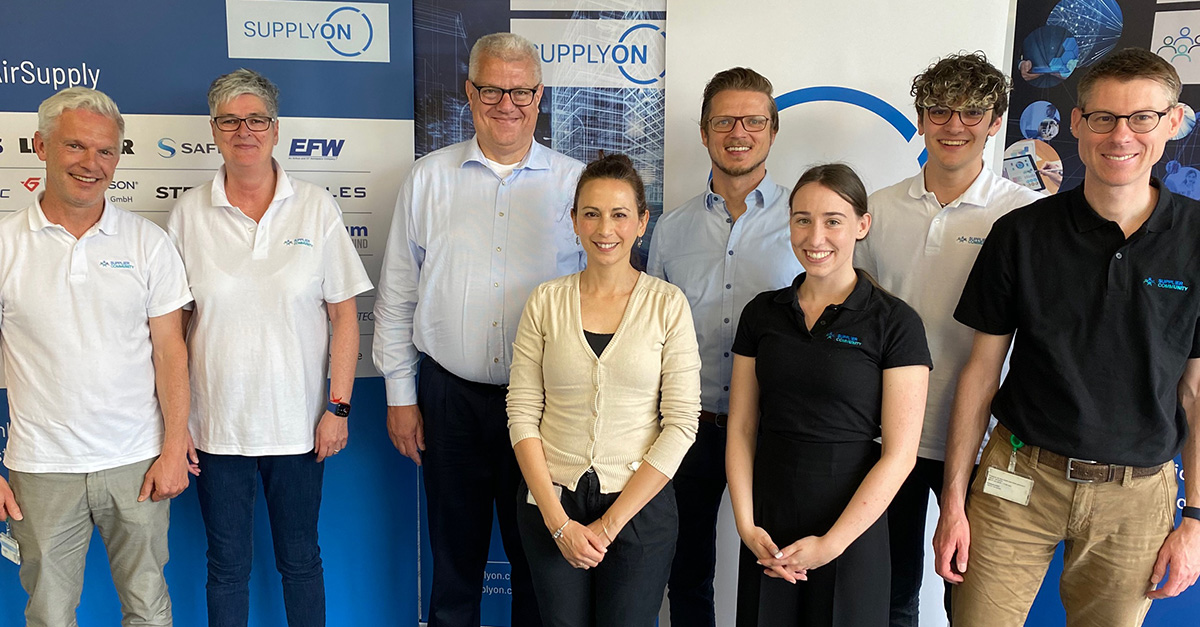 Inspiring speakers at the last Supplier Info Event: In addition to Markus, CEO of SupplyOn, we also had Achim as Head of Purchasing & Supplier Management Sustainability from Schaeffler and Sandra as Expert Sustainability in the Supply Chain from ZF Friedrichshafen on board.